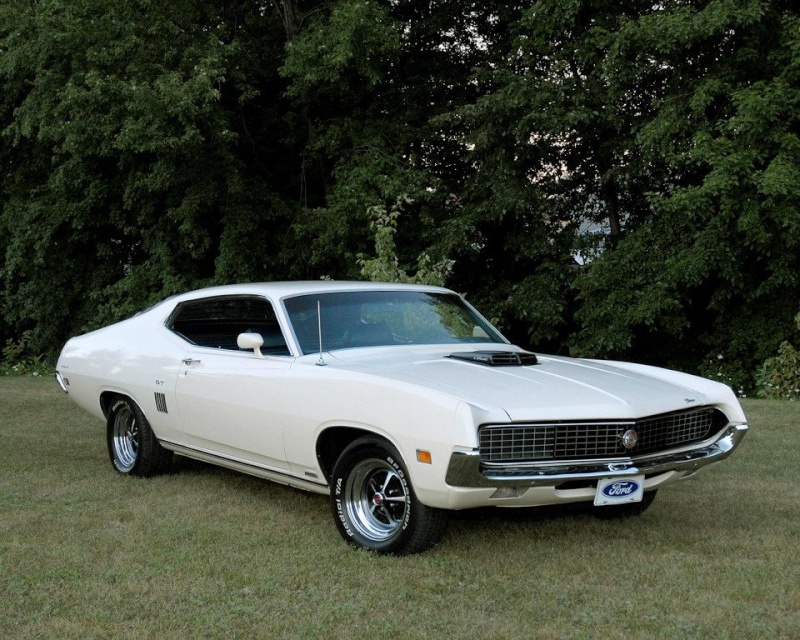 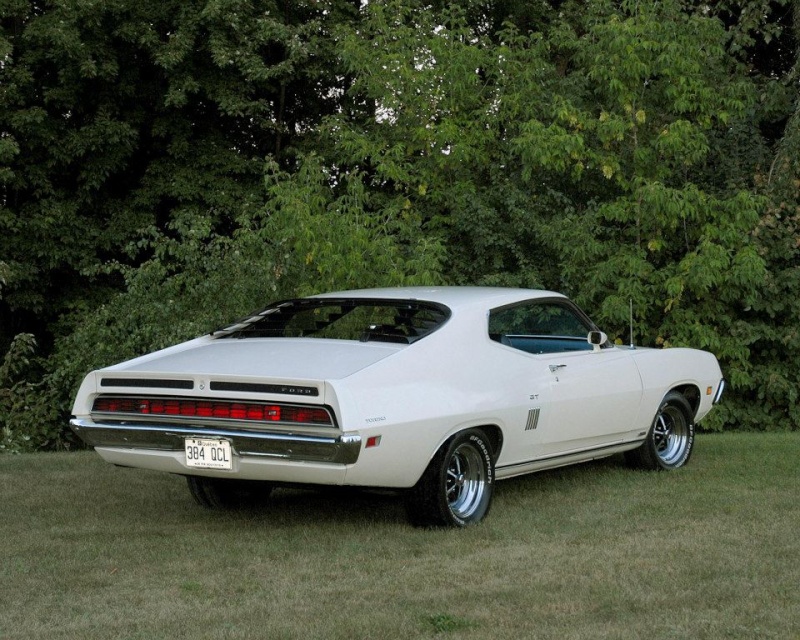 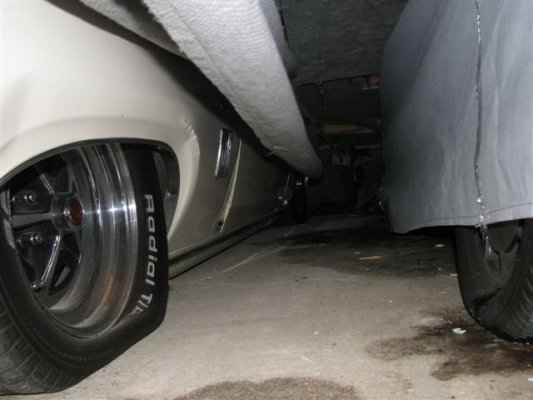 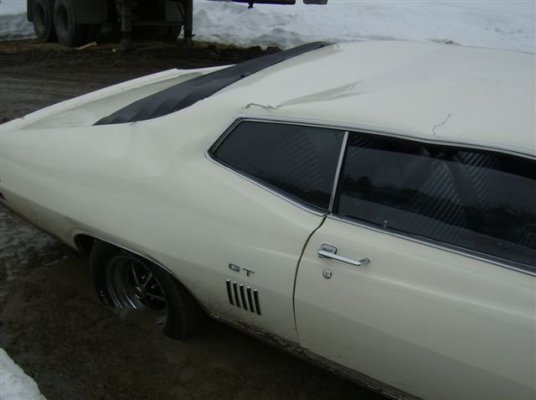 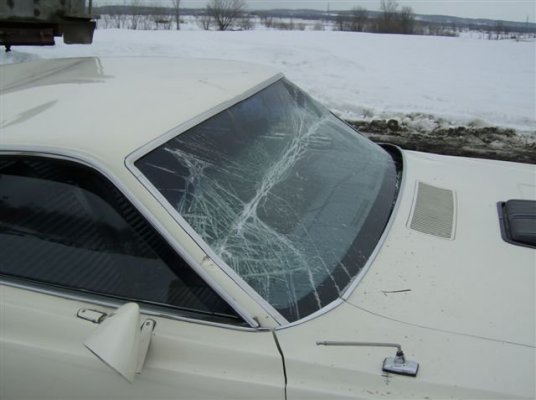 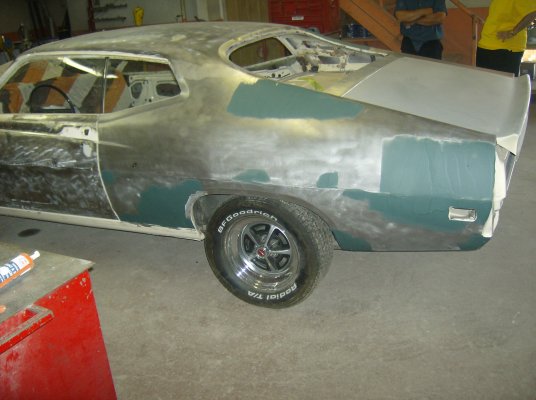 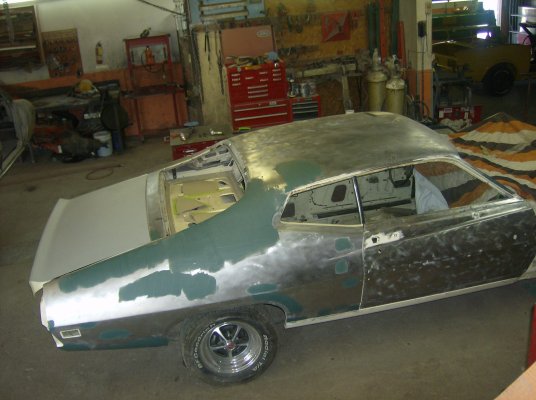 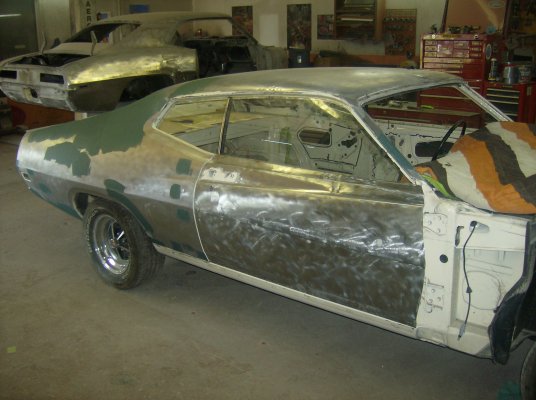 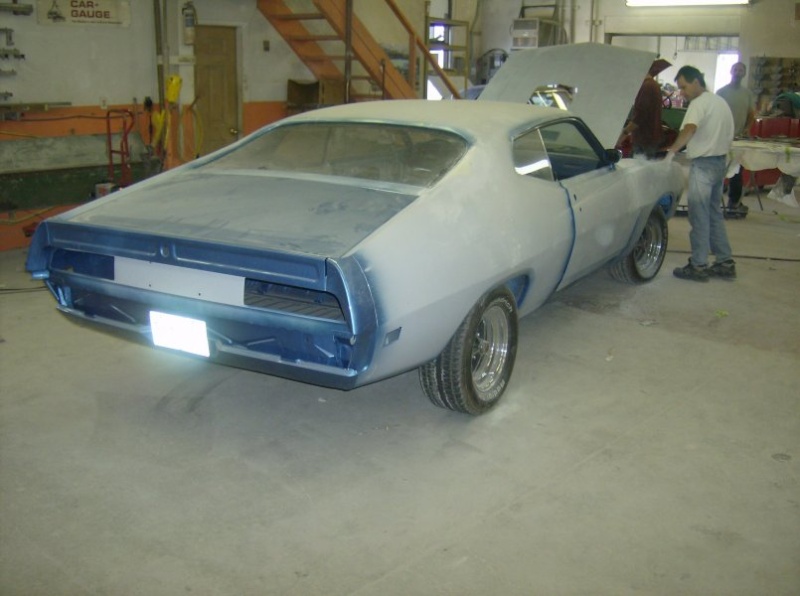 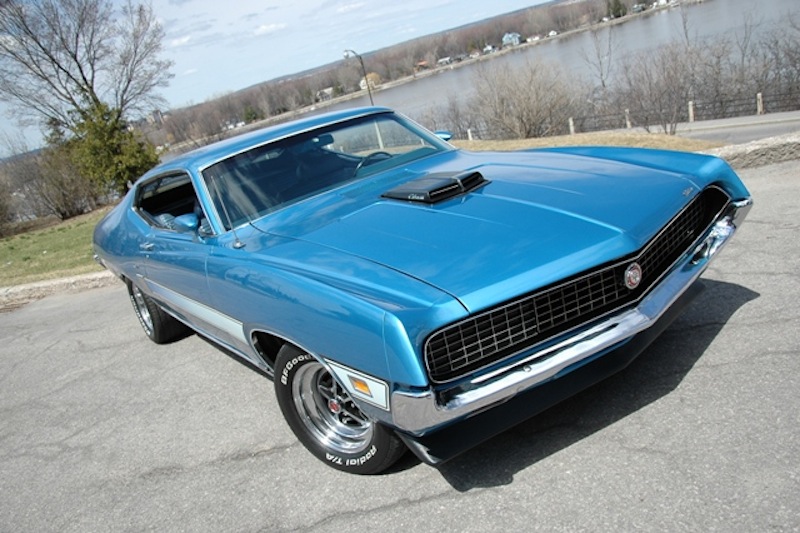 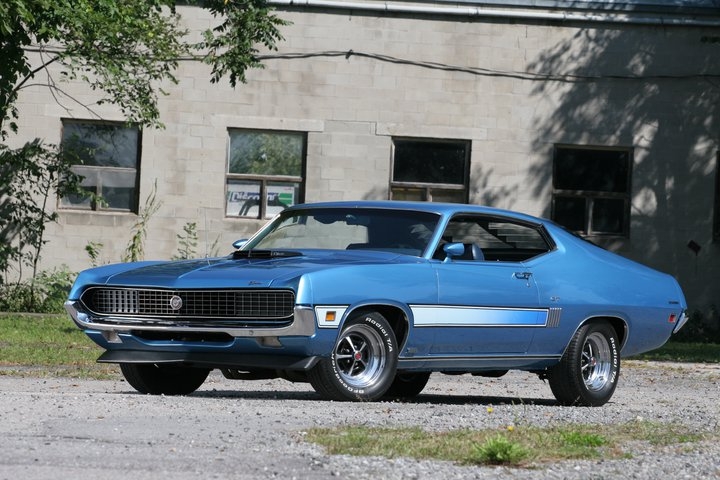 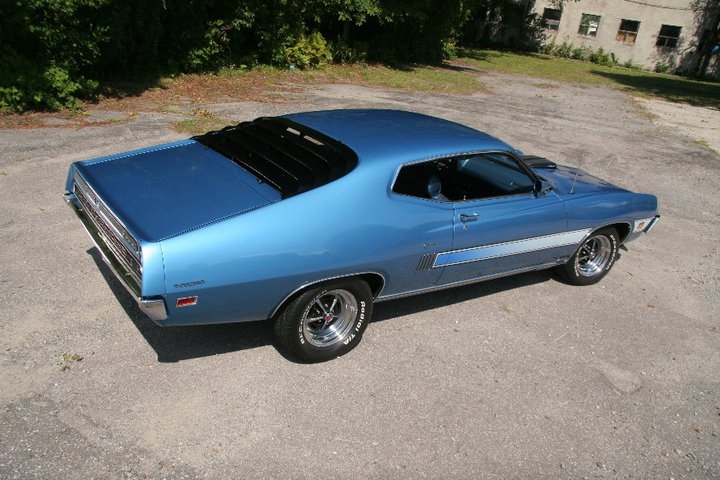 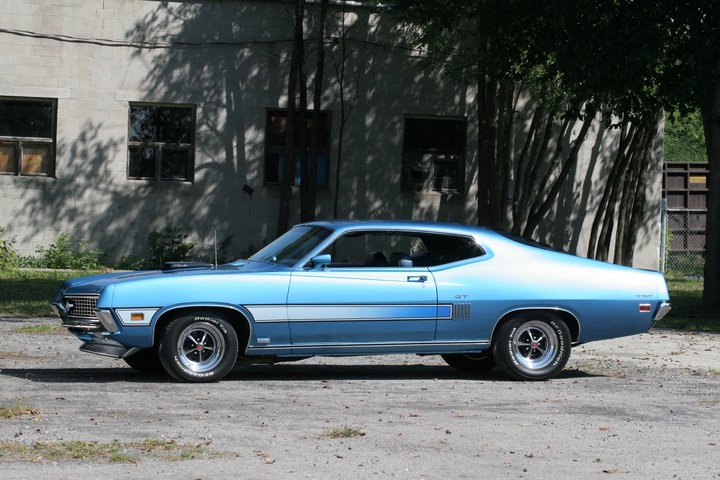 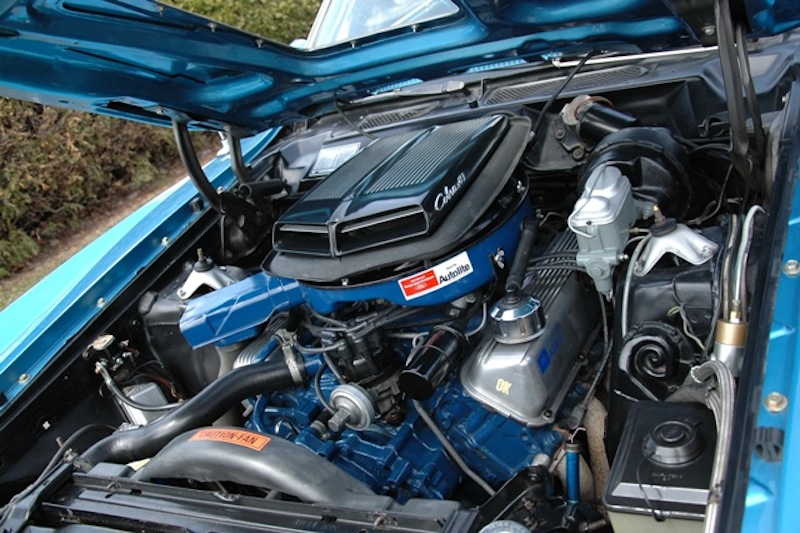 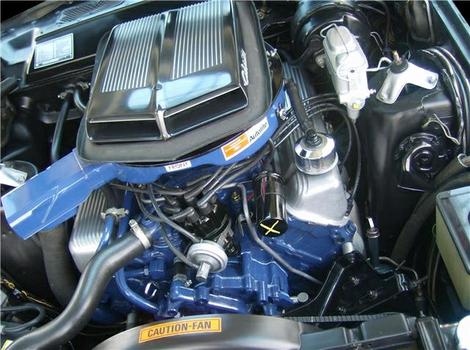 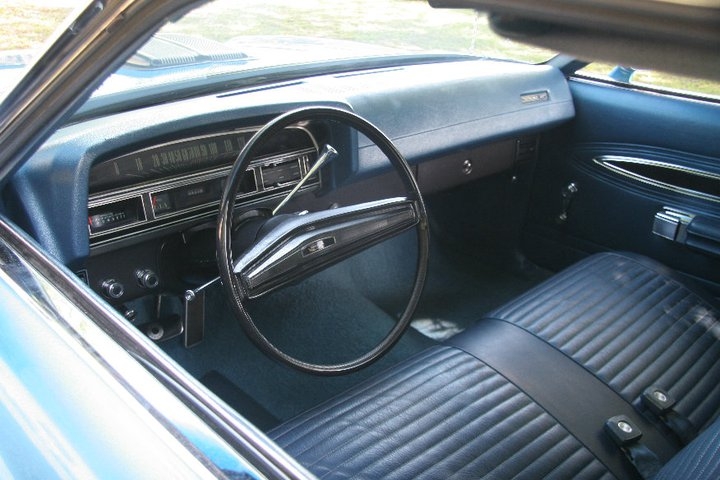 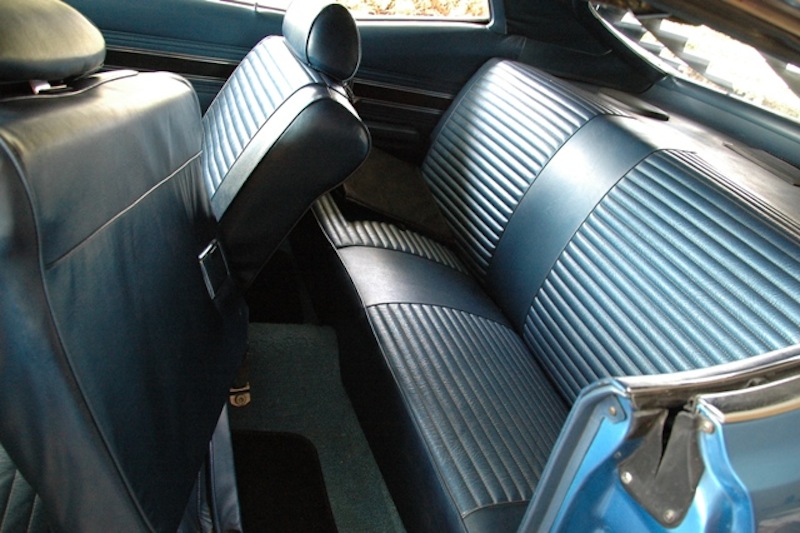 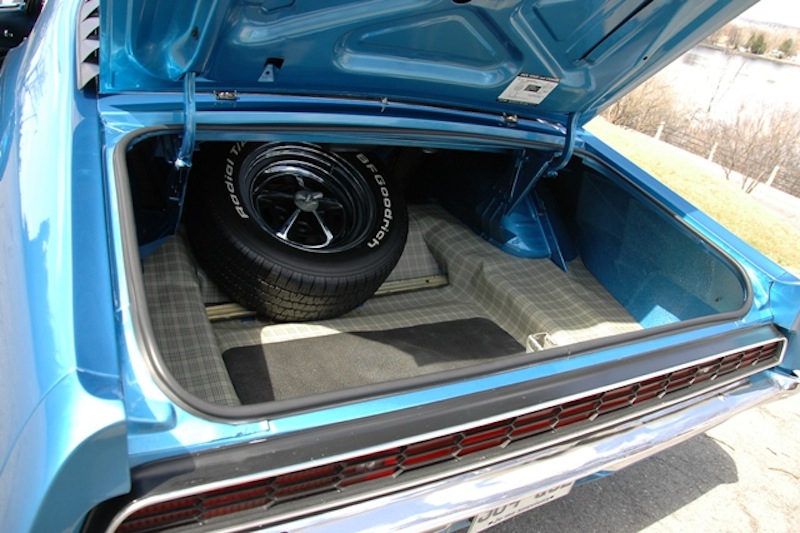 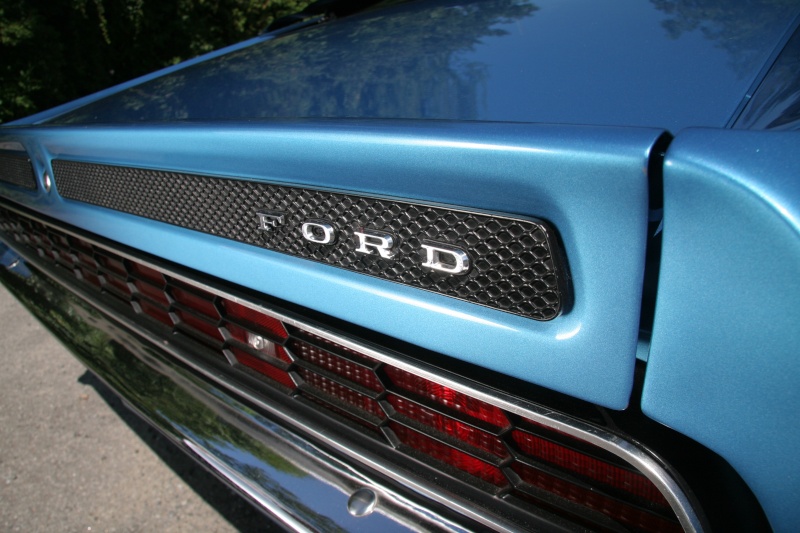 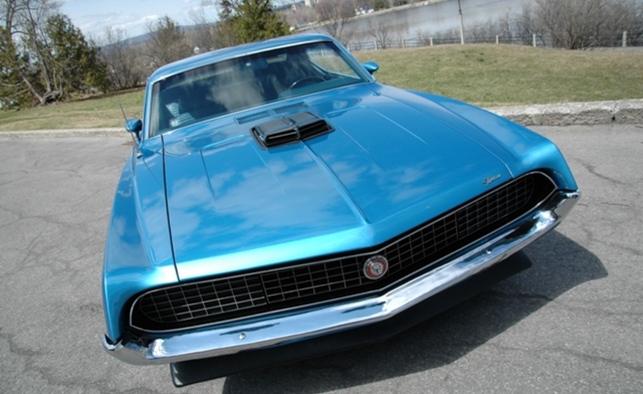 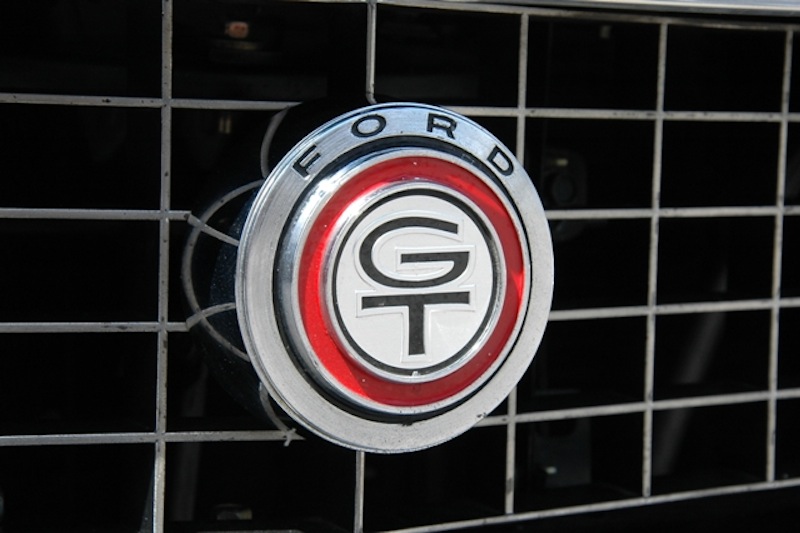 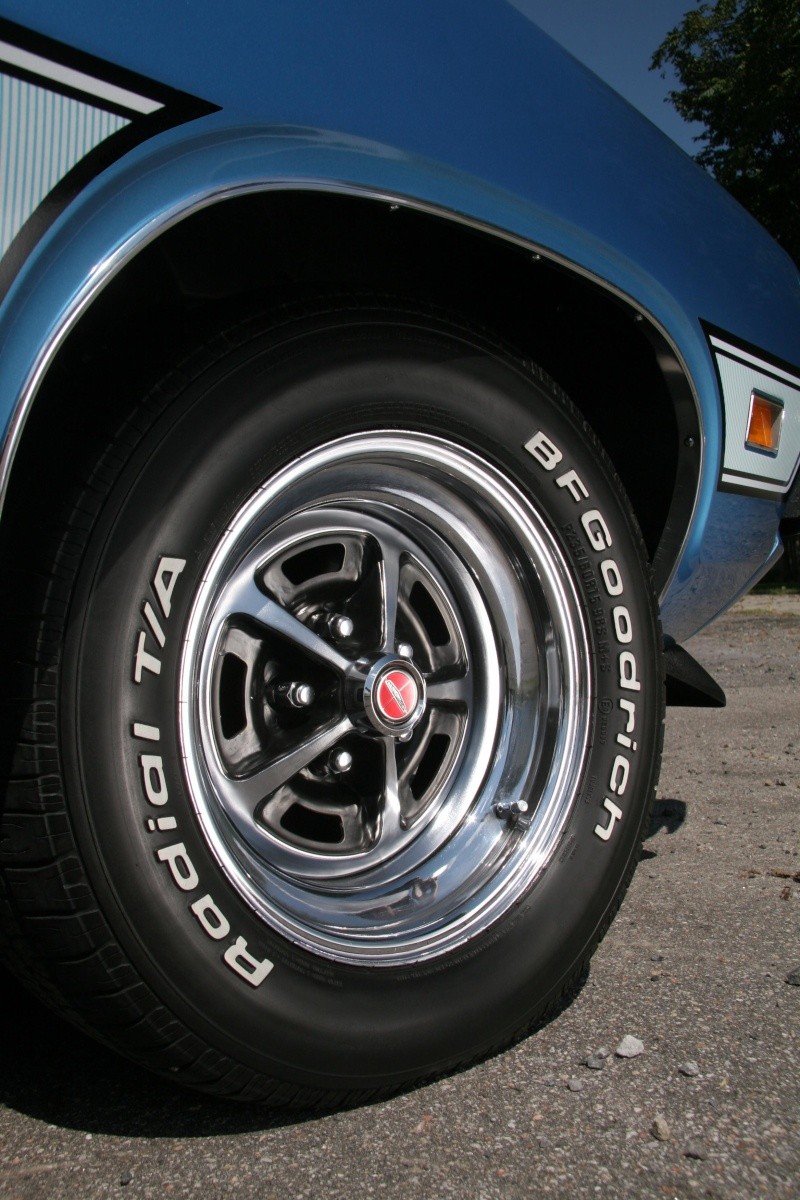 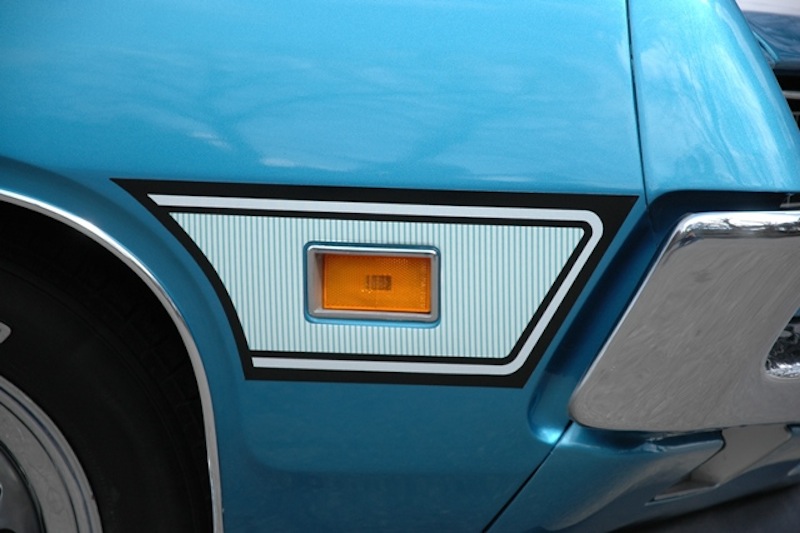 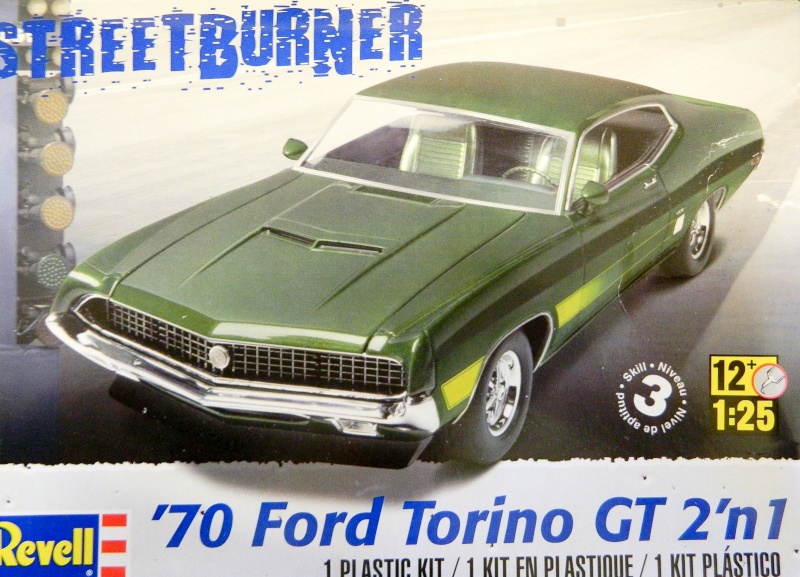 Un drôle de hazard, mon chum Robert a envoyé ce soir un "historique" de sa voiture!
"Rob's 429 SCJ powered Torino GT.
Me and my car: My dad is a Big Mustang enthusiast, even though he did own a few awesome GM cars, such as a 1959 Chevy Impala, 1964 Pontiac Acadian, 1969 Chevelle convertible and a 1972 Buick Skylark. By the time I was old enough to realize what cool cars were, my Dad had already owned these great cars. But by 1978, he told me how he always dreamt of owning a 65-66 Mustang. In the early 80’s he finally bought his ’66 Stang and then in 1986, he bought a brand new Mustang GT.

So I was brought up thinking Mustangs were the way to go. That summer I bought my first car, it was a 1970 Mach 1 Mustang, powered by a 351-4V with automatic transmission, My dad and me spent 6 months, 5 nights a week restoring it. Final product was finished in Calypso Coral orange with factory Mach 1 hood and deck lid stripes, it featured the shaker hood option, Magnum 500 wheels, front and rear spoilers. It was a great looking car. But unfortunately, I ended up selling the car to go back to school and earn my degree in Architectural design. When I would graduate, I promised myself to find my dream muscle car, which at the time was a 1969 Mach 1 with the 428 Cobra Jet power plant and 4 speed transmission.

But by the time I was ready to buy another muscle car, the prices of these big block Mustangs sky rocketed to unaffordable status for the common bread winner, so I started looking around for another “Blue Oval” muscle car I could afford. I’ve always had a soft spot for the ‘65 Ford Galaxies, but I thought it didn’t have the “Muscle image” I was yearning for. I then looked at the other Galaxies, Fairlanes, Cougars, Mustangs, Cyclones, and Comets… but nothing really caught my attention, until I saw this ’70 Torino GT pass before my eyes. I still remember the first time I saw it. It was the summer of 1992, when our club The Eastern Ontario Mustang Club, was having its yearly car meet. It was love at first sight! Its sculptured nose and aggressive though elegant long-sleek lines really caught my eye! I knew then what my next muscle car was going to be.
Back in 1970, the new Torino won the Motor Trend car of the year award. That year, Ford produced 56,819 Torino GT sportsroof. According to Marti’s autoworks, only 241 came equipped with the Drag pack option. At Ford, The Drag pack was the top performance package you could get. For the Torinos this included a 4 bolt main 429 Super Cobra Jet block, forged aluminium 11.3 compression pistons, 780 Holley carburetor, “in your face” oil cooler, solid lifters, 3/8 fuel line, 4 speed Top Loader or optional tight shifting C6 automatic transmission and your choice of two rear axles, the 3.91 Track lok or 4.30 Detroit locker, both were 31 spline, 9” nodular steel “bullet proof” rearends. This Torino also features optional “hide-away” head lights, Magnum 500 rims (still the original ones), rear window louvers, “J” code shaker hood scoop, factory tach and AM radio.
According to my research, my Torino was bought brand new in Scarborough Ontario Canada by a 50 year old Chinese man. New to America, he needed a car, he went to the Donway Ford Sales dealer and bought this band new Ford Torino GT not realizing what the car really was. After all the paper work was done, he drove it home. A few weeks later, he called up the dealer complaining about the poor gas mileage he was getting out of the big 429 Super Cobra Jet. The salesman tried to explain to him that he bought a very special muscle car and it was not built with gas economy in mind. The little man, who could barely see over the dash board, didn’t know what the salesman was talking about and even though he was upset, decided to keep the car.
When the winter months came along, he called up the salesman again, complaining about the poor handling qualities the car had! “I’m always slipping and sliding all over the place, I can’t even go up my drive way without loosing the rearend. I want my money back!” he said. But by then, it was too late, the salesperson told the poor man that he was stuck with the car and that he must try to make the best of it. So the Chinese man basically used the car for small errands and started to take the bus to work while the car lay almost unused in his garage.
In the early 80’s, he was transferred to the Ottawa region and brought the car with him (God knows why he kept it for so long, he didn’t even like the car in the first place.) The Torino was then sold to a young lad. The new owner street raced it for a few summers leaving his mark on the Ottawa streets! One night, he lost control coming out of an intersection and realize he wanted something with less power but with more handling qualities. So in 1984, sold it. The third owner had it completely restored by Riverside restoration, a well known restoration facility specializing in Ford products, and painted it Wimbledon white instead of its original Medium blue metallic color. He enjoyed the car for the next 12 years before storing it for another 8 years.
Twelve years after seeing the car for the first time, In 2004, Steve finally accepted to sell me the car. At the time, the odometer read 58,800 original miles and everything had been kept original right down to the air pollution pump and exhaust manifolds. Back in 2008, I had the car repainted in its original color and I installed a set of factory Laser stripes, which really make the car stand out!
Today, this 69,000 mile ''legendary street warrior'' is mostly used on sunny days, Saturday night cruises, car shows and the occasional “Green light Grand prix” of course! I actually had a chance to run her at the track a few times, my best E.T. is 13.2 @ 105 mph.... Very impressive, considering it weights-in at over 4,200 pounds! It took me a long time to finally buy my dream muscle car (though, I would have preferred a Top loader 4 speed transmission.) You can bet I’m enjoying every moment driving my pride and joy!"
Désolé que ça soit écrit en Anglais, mais il a décidément écrit ce texte pour ses amis anglophones...
À+
_________________
Projets (TRÈS lentement) en cours: 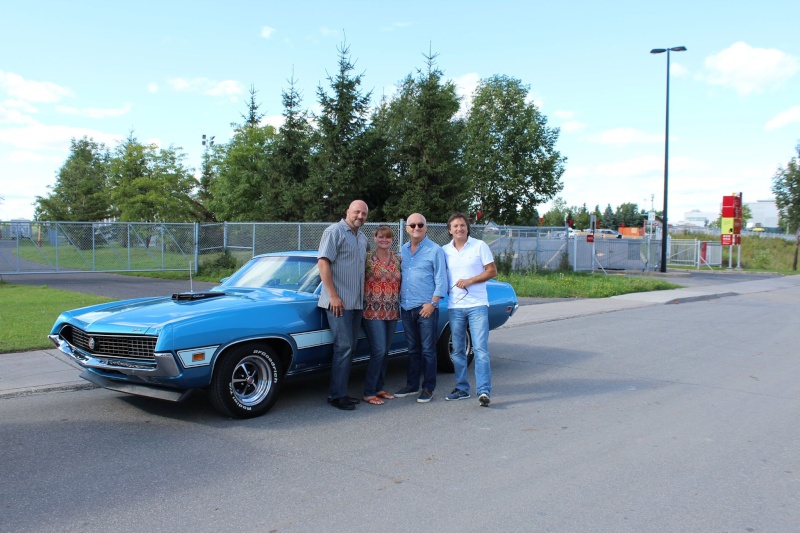 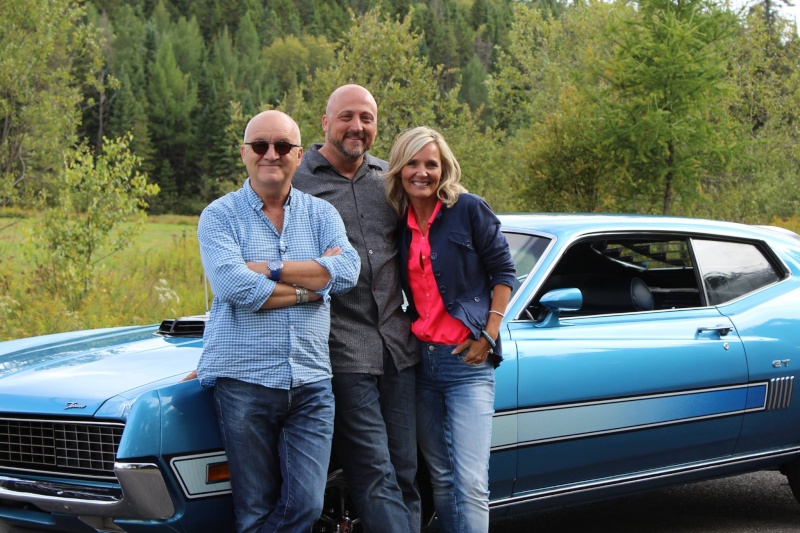 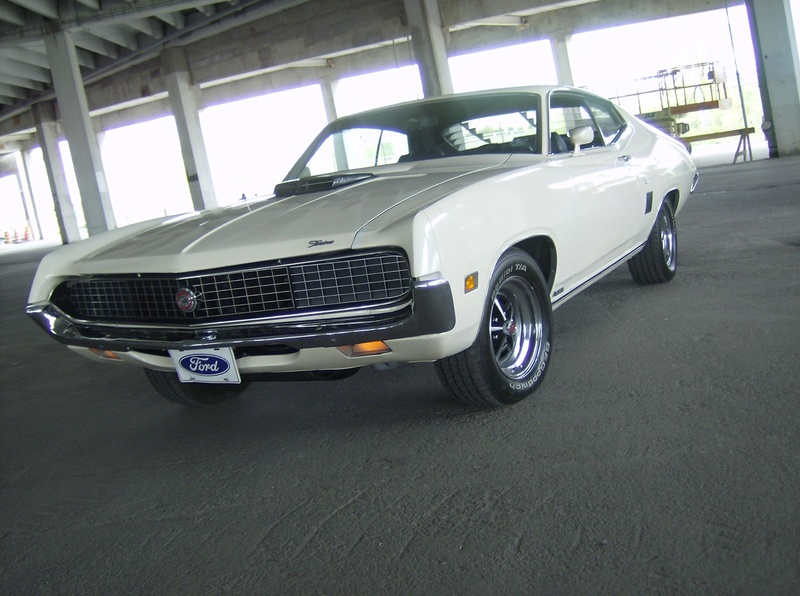 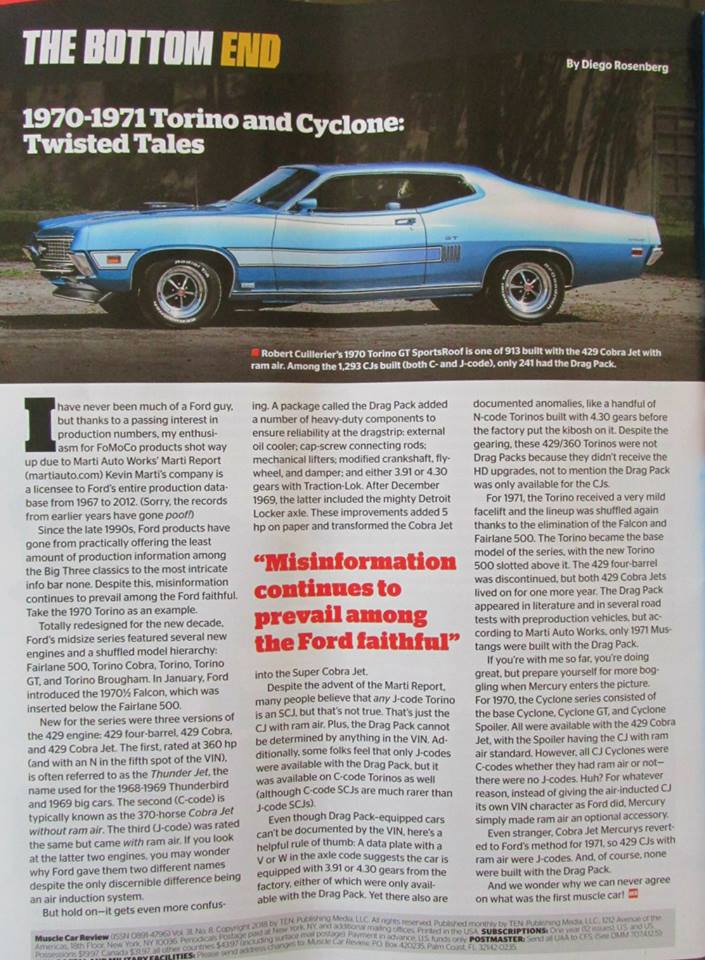 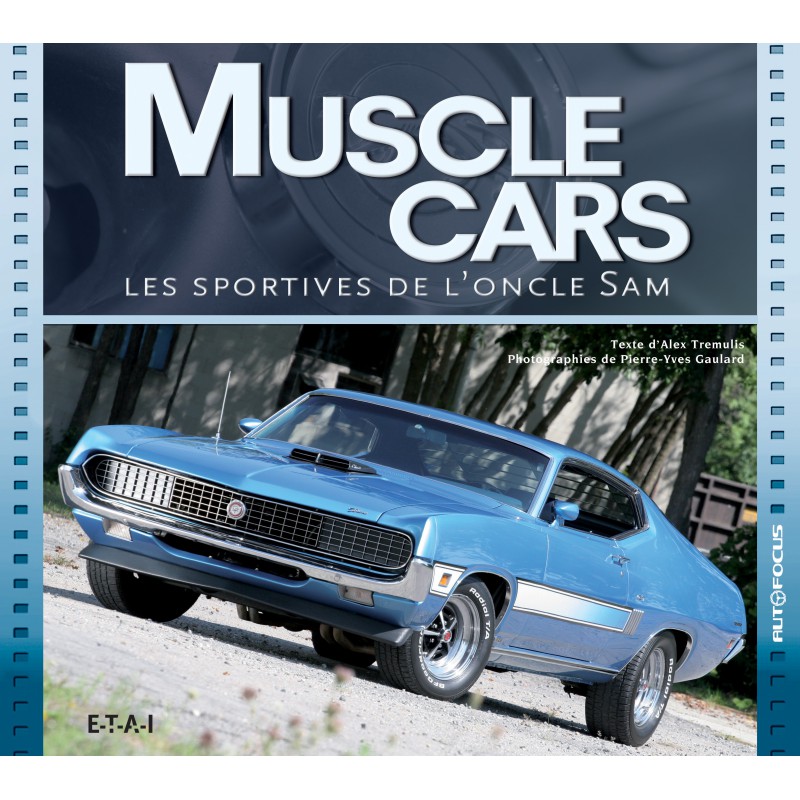 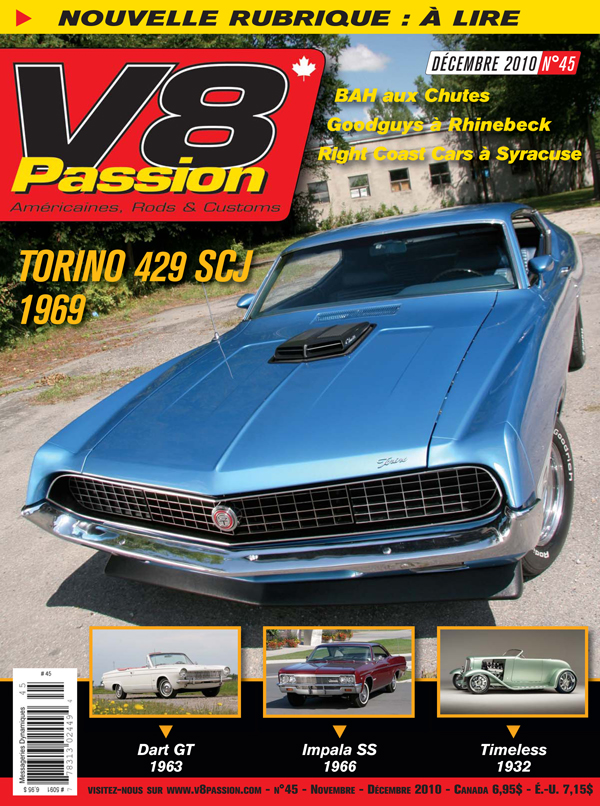